To begin with, I would like you to talk about ABB business strategy. 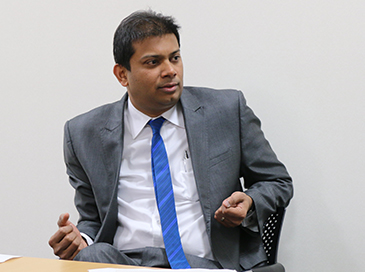 I’ll talk about two things. Number 1 is from an ABB perspective, how we see the power of market in Japan that’s one topic. The other topic I would like to say in general is how ABB as a multinational company look at Japan do from a talent point of view, from a business angle.

From a power market scenario Japan is really poised for a very fundamental and major restructuring. This is clearly visible with all the indicators that come from the government, from the policymakers. And, this is a once in a lifetime chance for Japan to do it as well. Now what was the trigger for it? The trigger point was obviously the May/11, 2011 incident and that incident actually brought to light the shortcomings in the energy system. The power system has been extremely robust but it’s structured in a very typical way that does not allow for any flexibility. But, now, of course, you cannot change everything at one time. It would become step by step, but until now nobody actually foresaw the need of doing so with urgency. This particular incident really brought the urgency to the picture. Therefore the government started to look at what happened, why it happened, how we can change things and when you start to change things you obviously have to do it keeping in view that these changes need to be valid for the next 50 years. You need to do it with a little bit of a futuristic view. One of the concepts that came to the forefront was the fact that Japan is so very dependent on imported primary energy, 92% of Japanese primary energy is imported. This situation today is the highest ever, ever in Japan. It had about 90%, in 70s when a policy change was made for oil purposes and then it came down to 80%, 70%, and now it has gone back to 92% which is the highest ever. Now with the Japanese Yen being weak, it made situation worse. But this weak Yen was supposed to support Japan on the export side, but instead it is affecting Japan because the imported fuel is eating up all the benefits of the weaker Yen therefore it has gone on the other side.

Now the question is how are we going to fix all this and how is the Japanese Government thinking?

The first thinking is to introduce a little bit of better energy mix, introducing renewable energy into it, since the renewable energy is already available in Japan being an island there is plenty of wind, solar. This is not something that you need to import, you can grab it. Now the question is how to utilize that in the system. It costs. You need to incentivize people who want to develop this. Feed-in tariff schemes came into picture and then lot of businesses were attracted to invest in Japan to help Japan to get renewable energy into the picture. 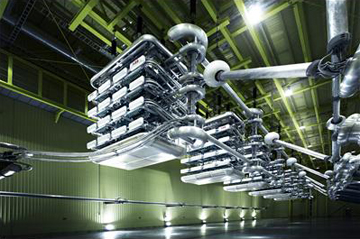 The second most important thing is until now Japan has not been considering power systems on a country-wide approach. It was not there because you had 10 power companies with their own sort of area which they were focusing on. Very little was being transferred across the boundary. If one region would like to do something utilizing the fact that Hokkaido has such rich resources of renewable, how could Hokkaido make sure that energy is transferred towards Tokyo or Kyushu? Today, the mechanism or the infrastructure does not exist but the consumers would very much like to be having a situation that future energy is independent of imported fuel at a reasonable cost. To realize this there has to be a country wide approach to integrate this power system and do all the possible things.

The third element is IT because today with all this smart generation which has already taken over all the equipment, cars, and this and that and the power system which is supposed to infrastructure where the consumer can also participate into the process, even sometimes as power contributors. The entire value chain is transparent and the consumer/payer has full knowledge of the content of his/her bill. There is enough intelligence in the system which minimizes the losses and inefficiency, so that it becomes economical for the producers as well as consumers. This is the revolution that is happening in the new energy system. These technologies are already being developed also in Japan, also elsewhere. We have a wide portfolio in ABB which actually allows us to think like this because we are in the business of power, we have the products and we have the necessary R&D resources within ABB. So, therefore, the interest in Japan, ABB can be a major contributor to being a successful change. .

Now if you think it this going to be bad for the utilities who are presently major players? No, because they are going to be also very important players in the whole game. There will be new players because of the retail market is going to open up. Players like Soft Bank who already have contact with near 40 million consumers, I am told, and they are already having contact. They will utilize that contact to also convert not only the mobile but also with energy.

Somehow or the other they would do it and then the existing ecosystem has to understand that these new players are coming and they have to become more competitive.

We will help the existing players also to become more competitive. We have portfolio like Ventyx which actually combines the strength of IT and OT, so all these assets that the utilities like TEPCO. They are deploying meaning the transformers switch gears, generation stations. If something is wrong in that normally only the technical people understand. There the management who is supposed to be deciding on CAPEX and OPEX they have no visibility. They have to depend on the information that is coming in whereas if you are having a system like Ventyx which connects the enterprise to the operation we have a complete mapping of the health of the asset and there will be a complete visibility like a window where the chairman or the president of the company would have an idea of what’s happening in his asset, in his language not in the technical language, in the dollar language. This is very interesting for the industry.

There are not many players who have done this. There are players like IBM and many others like Accenture who are only looking at the enterprise software. Then, there are companies who are on the other side only looking at the equipment, but there is no bridge. Today, ABB has the unique strength of having this. This is fundamentally the strength also. We are very curious and we are very keen and very confident with this technology strength we have a very good platform to actually support the Japanese power system, the new energy system that we have. That is from how we look at the market and how we look at this.

Getting talent from Japan and utilizing the strength, this will help ABB

The second part is how we look at talent. What does Japan bring to ABB?

I have been around in different countries working and living as well, so I see every country has something unique to offer as a part of the DNA, as part of characteristics coming out of the company. Japan has something very unique which I don’t think many countries have to offer and that is the knowledge of how to deploy processes in the most efficient and effective way and also to get the optimal quality from a product line and the awareness of perfection. This is fundamentally a very Japanese quality. Now ABB as a multinational has presence in so many countries and every country as I said has something to offer. Let’s imagine that we have a country like China and India. China is a mass manufacturing company. India is coming there. There is a lot of soft knowledge. If you put China, India, and Japan together and try to utilize the strength in these three, we will get three fundamentally strong locations with a lot of sustainable or predictable outcome. Mass manufacturing complemented with quality management and softer skills is one package. It can be sort of, you know, leveraged and we can really gain a lot from having this kind of exchange of qualities, if you may. By getting talent from Japan and utilizing the strength also in other countries this will help ABB, but we need to be able to do that properly and effectively through the HR system.

ABB as a company allowed me to do changes

I also want to know how you think the great thing to work in ABB. 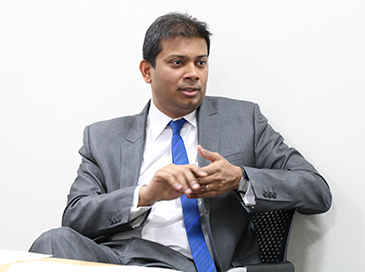 It’s wonderful. I mean I have been here now 20 years. I never thought I would last that long. The fundamental reason is because I like change. Change is the only constant in life. This is my philosophy. If you know that things are changing then you know that it’s okay. If something is not changing, then something is fundamentally wrong. ABB as a company allowed me to do these changes. They trusted me and gave me or let’s say empowered me to experiment with myself and with the company. Fortunately 9 out of 10 times it has worked.

That’s why it kept me going. I have a tendency to take a job as a mission and there is a definite timeline I work with and the company has understood that over 20 years that I work like that, so that they also expect me to go with the target, have a timeline, finish it, and then they have something ready for me as the next mission. This has worked. This is at least my formula.

Change is the only constant. You need flexibility

What kind of profiles do you want to work with?

I like to work with youngsters meaning they are easy to mold and my experience is also more with them I would say, 70% of the people who I have been working with have been, let’s say, in the early 30s or in the late 20s, so there they have a bit more flexibility and my experience also goes in many start-ups and many new things to set up and all that. When you want to fundamentally change into something new, you need flexibility. That is why my bias is towards the younger side but you need to have a mix, you need to have a mix of young blood and also experience to make it perfect.

Could you give us some kind of message which you want to deliver to our new employees?

I think the message was all I had said earlier change is the only constant.

I think that is my message. Be ready to challenge the status quo. Always challenge status quo because status quo is not real. Status quo is an artificial state. The real state should be a state of change because change is the only constant.